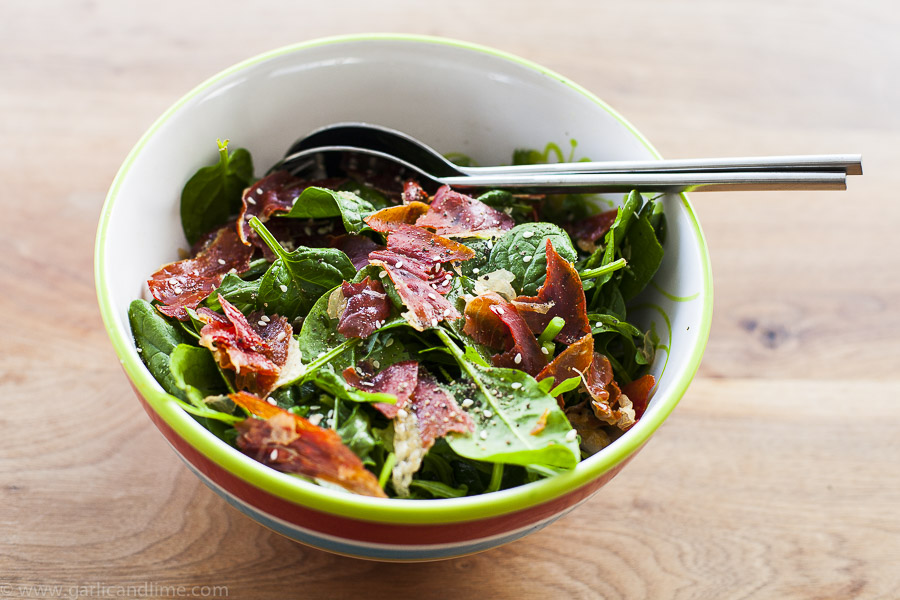 The focus of our food philosophy is on prioritizing vegetables and fruit over other food groups, and making sure that we are feeding our bodies nutrient rich food. Living in the eternal heat that is Singapore has resulted in us eating a lot of salads, and having a salad for lunch is a great kick starter for the amount of vegetables that we are eating in a day.

This salad has become one of our favourites. Using both rucola and baby spinach leaves adds some interest to the lettuce base, while the beans or asparagus add a little more substance to the meal. The sesame seeds finish it off attractively, while also adding essential nutrients. You could also consider adding pumpkin seeds, sunflower seeds or pine nuts to the garnish, especially if you remove the parma ham to make it a vegetarian or vegan salad.

Music to go with it…
Listen on Spotify: Roadkill Ghost Choir – In Tongues

Vanilla comes from a variety of orchid that is native to Mexico. Initial attempts to grow it outside Mexico failed and it wasn’t until 1841 that a method of pollination was discovered (by hand) which didn’t rely on the native Mexican bees. This resulted in the spread of vanilla to many other tropical lands – including Indonesia who is now one of the biggest producers.

The labour intensive nature of pollination has ensured that vanilla is the second most expensive spice after saffron.

There are four main commercial preparations of natural vanilla:

We only buy the whole pods to avoid the likelihood of sugar and alcohol having been added commercially.

Vanilla can be added to a dish either by adding the whole pod to the liquid  in a dish that is being heated (a stronger flavour will be imparted if you cut open the vanilla bean before adding it), or by cutting open the pod and scraping out the seeds. Adding the seeds is commonly used in baking.